Therefore God has highly exalted him and bestowed on him the name which is above every name,

that at the name of Jesus every knee should bow, in heaven and on earth and under the earth,

and every tongue confess that Jesus Christ is Lord,

Christ the King was started as a mission of Our Lady of Perpetual Help Church. The first Mass was said in 1948. It became a parish with a resident priest in 1952. We celebrated our 50th anniversary in 2002.

But today, even some people who've lived in Oildale all of their lives don't know it exists, which is why we put the signs up on Chester and Norris and Manor and Norris.Though the convent and school have become Christ the King Center, and renovations and additions, such as that of the prayer garden next to the chapel, have taken place, Christ the King has managed to gracefully move forward while retaining its identity and serving as the favorite Catholic church of many Northwest residents.

The church's blonde wooden pews were built in 1948. A niche still houses a statue of the Infant of Prague that was present when the church was blessed, dedicated and named on October 29, 1950, the Feast of Christ the King. Guiding the church into the future is Monsignor Frost, who was born in 1951, ordained in 1977, has been director of the Diocesan Tribunal for years and is a current judge on the tribunal.

- excerpt from article in Northwest Voice by Lauren Ward

The church's sanctuary renovation "...project was realized through the efforts of its parishioners under its pastor Monsignor Stephen Frost in February 2022. The goal was to improve its sanctuary in the direction of the Gothic style of architecture. The base design emanates from the crucified Christ raising his gaze to heaven, flanked by His sorrowful Mother on the left side, aided by St. John the Apostle on the right side. Niches of Saints were added on both sides starting from left to right, namely, St. Joachim, St. Anne, St. Joseph, St. John the Baptist, St. Therese of Lisieux, and St. Anthony of Padua. The sanctuary, with its limited space, was carefully planned to accommodate a front and back altar, priest chair (cathedra) and assistants' chairs, lectern, credence table and communion rails."

While the parish may undergo changes in the coming years,

there is one aspect of this little Catholic parish church

that will never change: its fidelity to 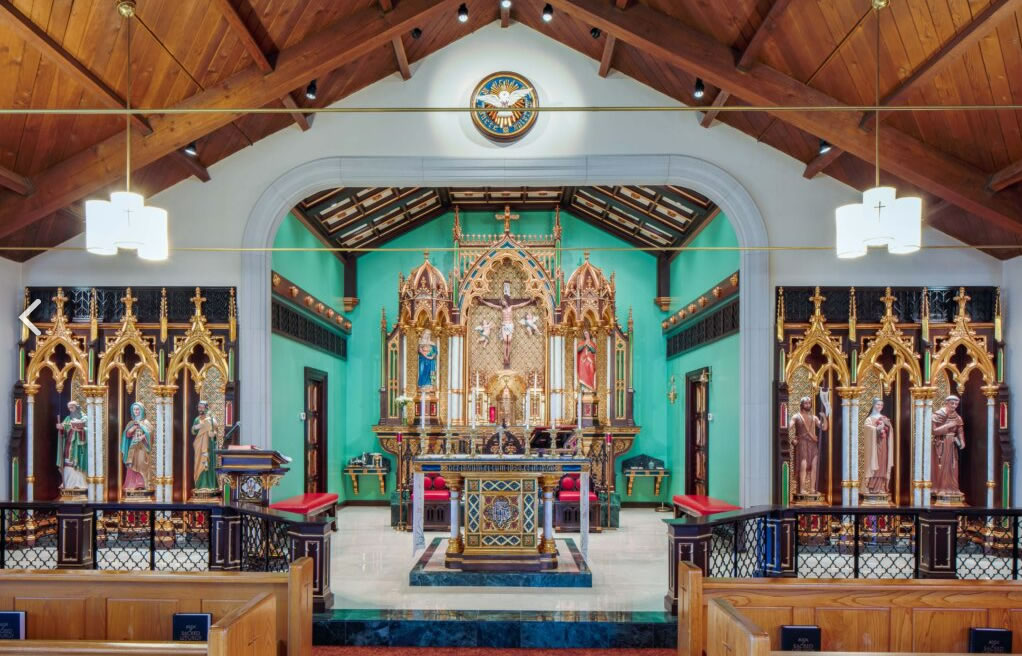